A splash of black grabbed my attention

West of Spiers’ pond is a ridge of beech trees. They are right in the middle of one of our deer runs. The plan was for me (on this particular fall hunt) was to walk with ‘Bella’ (ye old trusty hound) north around the pond while walking along this ridge.

We were hoping to push deer off the ridge and along the pond to strategic points on the north and west sections of the pond.

After a half hour wait in solitude (except for an anxious hunting dog), I started the trek north. Bella, ranged on all sides of me as I walked.

That was until I reached a stand of beech trees. Then, things got interesting.

As I pushed through some evergreens and walked into an opening of beech trees I got that ‘someone’s watching‘ me feeling. The dog felt it too because she stopped suddenly and began growling. I pulled my gun up to my shoulder (though not in a firing position) and waited. That’s when I heard some ‘crashing’ through some evergreens ahead of us. The dog stopped growling and began sniffing the ground again. I eased up on my gun and began to look curiously at the beech trees in front of me.

It was obvious that a bear had just been up it as there were fresh claw marks going up to the top of the tree. I had seen those before in other trees in our hunting area. What I had not seen before were all the leaves around the base of the trees had been pushed away into a ring that surrounded it. Picture a large donut on the ground with this beech tree coming out of the hole in the center. There were other beech trees in the area with the same pile of leaves. Bear tracks were clearly visible in the leaf-free dirt. Nervously, I began to walk again as I did not want to let the guys down who were waiting across the pond.

About 25 yards later, I came across another grouping of beech trees with the same leafy formations. A splash of black grabbed my attention, to my right, as I snapped my gun up to my shoulder. My heartbeat gave away my position.

It was nothing. Just bear shadows. I didn’t have a tag for those.

This time the dog walked over tight behind me and stood there panting. It was like she had enough of this. So, I pulled my hunter’s prerogative card and cut west and low to the pond.

I got no arguments from Bella. She was already ranging between the swamp grass and the pond’s evergreens. Over dinner, I explained to the guys what I had seen – leaving out the part about my slight course change.

After supper, I stepped outside to visit the outhouse and Bella followed. She had to do her thing. Upon returning to the cabin deck, I reached down to scratch an itch on my ankle and I pulled off a beech nut from my sock.

I threw it out into the darkness.

Seconds later, I heard some branches breaking. Bella and I looked at each other and walked back into the light and warmth waiting just behind the cabin door.

The glow of the woodstove kept the bear shadows outside. 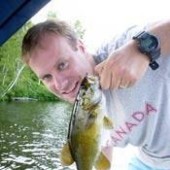 Journeying through hunting, fly fishing, and fatherhood from within the wilds of Ontario. I'm probably the rookie downstream from you.